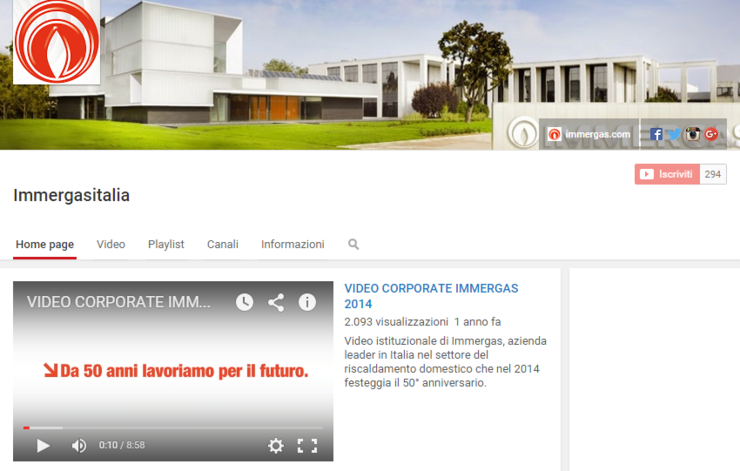 Brescello 30th October 2015 - The Immergasitalia channel on YouTube turns four this year and the birthday coincides with reaching their first 100,000 views. The counter that indicates the number of times the Immergas video has been viewed on YouTube has passed the 100,000 mark. «This is an important sign for us - says Ettore Bergamaschi Operational Marketing & Communication Director at Immergas - because it reveals a constant attention for the products, services and technical information that we provide with social media, in addition to hundreds of direct, daily contacts with our installation technicians who deliver Immergas to the end users. There is another important reason why we wish to highlight the 100,000 milestone: this communication line is coordinated and managed by an in-house team. This decision has made it possible to provide constant, timely response to online users. In a little over four years we have produced almost 100 videos (both in Italian and English).

The growth in the number of views is exponential: in 2014 we totalled 50,000 views, today we have more than doubled that figure. Subscribers to the company's YouTube channel are almost 300. We have also created ten playlists on different topics that make it easier to search and view videos on a specific subject. A definite contribution to the increase in views came from our new website www.immergas.com launched in December 2014, which also has links to the other social platforms: Facebook, Twitter, Instagram and Google+ which are often used synergically to achieve maximum dissemination of our information».

More and more web users have active accounts on various social media; on average, each user is present on 6 social media, of which 4 are used actively.

In the world of social media YouTube rates second, after Facebook, with over 1 billion active users in the world