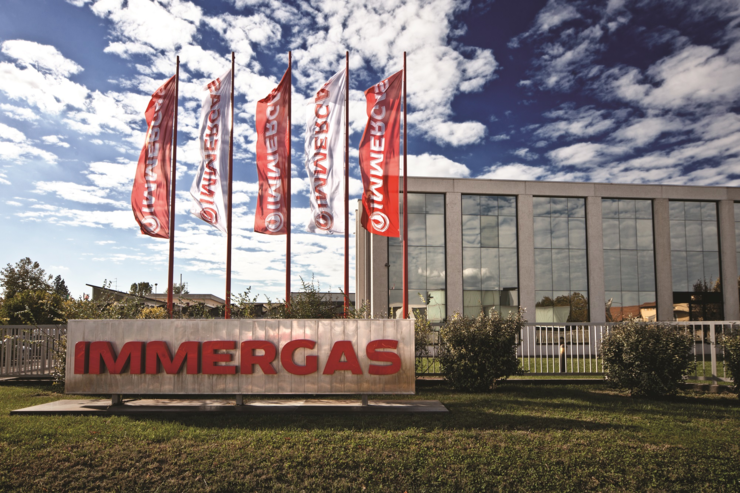 Brescello 13 June 2019 - In 2018, the Immerfin group that controls Immergas, Italy's leading brand for condensing boilers, reported a 16% sales increase compared to 2017. In terms of overall volumes, more than 400,000 appliances were sold around the world, with many countries reaching penetration levels that had never been achieved before in 55 years of industrial activity in the home heating field.

In the area of wall-mounted gas boilers, the market share of Immerfin group brands (Immergas and Alpha) stood at 15% in Italy, 6% in Europe and 4% worldwide.

«In 2018, thanks to our massive investments in product innovation and manufacturing processes» - confirmed Alfredo Amadei, Immergas chairman- «we also saw an increase in the sale of systems designed for the professional channel and of those based on new green technologies (heat pump and hybrid systems); in Italy, we have reached the leading position in the hybrid generator sector, with a share of over 30%.

A positive result that we want to build on and exceed in the future, thanks also to the creation of the new Laboratorium Research Centre in Lentigione di Brescello (inaugurated in October 2018 with an investment of 6 million euro). In addition, the Immerfin Group is expanding its geographic footprint both in Italy, with the launch of new growth projects, and abroad, through an upgrading of pre and post-sale services, with the aim of replacing the large number of installed units, amounting to over 7 million units».

The profitability margins are steadily supporting the investment plan that allows Immergas to maintain its high competitiveness.

The 2018 financial statements of the Immerfin Group closed with a profit of 14.4 million euro, which sets the ROE at 5.63%.

Immerspagna, the new company controlled by Immerfin with headquarters in Madrid, reported a 52% increase, which bodes well for 2019 too.

In China, where the production of boilers started a few weeks ago at the new plant built in the National high technology district of Changzhou with an investment of 3 million euro, the Immerfin Group reported a 19% sales increase in 2018: «A very good sign» - added Alfredo Amadei - «in view of the opening ceremony of the production facility (scheduled in September 2019), we hope it will replicate the success achieved in 2008 by Immergas Europe in Poprad, which now employs 100 people».

«The indicators we gathered in the early months of 2019» – concludes Alfredo Amadei – «confirm the upward trend. Several new projects have been launched in Italy and abroad, involving our sales network and service organization, aiming at the replacement of old boilers, from which we expect good results also in terms of profitability».