THE LINE OF THE FUTURE: A GREAT DAY FOR IMMERGAS 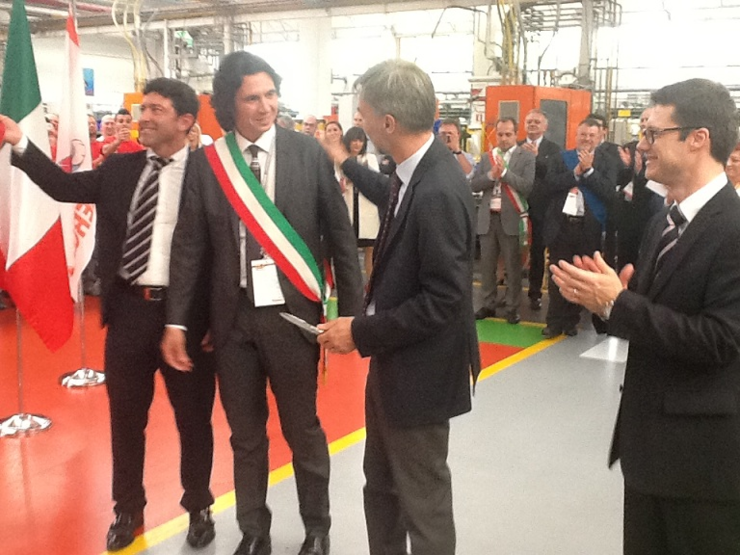 In its 50 year anniversary, Immergas inaugurated its new production line in the Brescello plant, before a number of important dignitaries, starting with Graziano Delrio, the State Secretary to the Prime Minister.

Brescello 30th May 2014 – It was an unforgettable day for Immergas, which in its 50th anniversary year, has chosen to celebrate its history with a mind to the future.To celebrate 50 years of success, their leadership in boilers in Italy for over 10 years and the sales in 43 countries with 10 branches and more than 15 partners abroad, the company organized an "Open Day" in the Brescello plant."The line of the future - Italian expertise for the next 50 years" was an occasion for a choral reflection on the future of the Italian industry, starting from those, like Immergas, who continue to bet on the vitality of our country. The discussion was joined by the State Secretary to the Prime Minster Graziano Delrio, Confindustria President Giorgio Squinzi, Maurizio Marchesini (President of Confindustria RE), Stefano Landi (President of Unindustria RE), Alberto Montanini (President of Assotermica) before a numerous public including important dignitaries and entrepreneurs.The new production plant has been entirely designed and constructed in - house by the Immergas engineering team led by Head Engineer Giuseppe Miele, to produce the new VICTRIX TT, the "50th anniversary boiler".It was completed with an overall investment in excess of 2 million euro and consists of two simultaneously operating assembly lines. The ribbon was cut by the State Secretary Graziano Delrio, together with the President of Immergas Alfredo Amadei, Immerfin Director Alessandro Carra and the Mayor of Brescello, Marcello Coffrini.The line was then started to allow everyone to see the production cycle of VICTRIX TT. Graziano Delrio "signed" the first boiler that came out of the new assembly line, and personally affixed on it a plate that celebrates this moment which, symbolically, opens the future of Immergas.During the event, the Operational Marketing and Communication Director, Ettore Bergamaschi, presented the volume "Forever Immergas! 1964-2014", 200 pages and a DVD that illustrate the first 50 years of the company, its current dimension and guidelines for the future of Immergas.