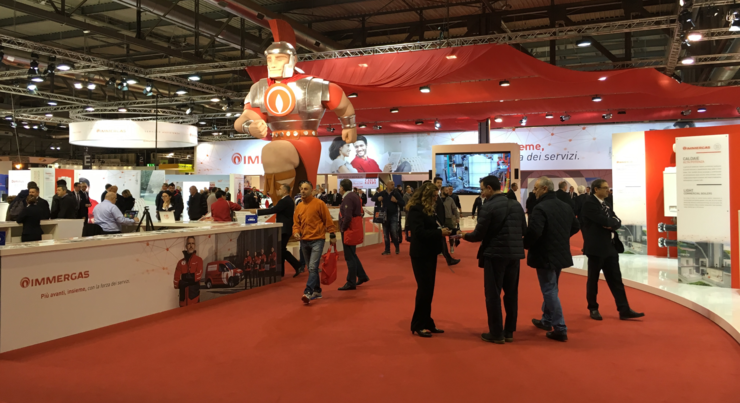 Brescello, 7th April 2016 - «Immergas has been participating in the Expocomfort Exhibition since the very first editions, but the 40th edition that just ended at FieraMilano set a new record of participation in the initiatives aimed at installers and designers». This is how Alfredo Amadei, Vice President of Immergas, summed up the experience after 4 days of record numbers: over 15,000 visitors to the Immergas stand, participating in more than 100 product and strategy presentations.

Lots of innovations. Throughout the exhibition, the 600 Immergas Authorized Technical Assistance Centres had the opportunity to preview the new look of the technical clothing designed to meet the needs of professionals in the sector, the new vehicles bearing the Immergas "signature", complete with special technical equipment adapted to the daily needs of those who cover thousands of miles to provide installations and assistance. There was great interest in the development of Formula Comfort Extra, the new maintenance programme which guarantees, with no activation fee, the extension of the warranty for 5 years or more. There was also great involvement in the initiatives of the Caius Club Professional, which includes over 24,000 installers and designers. «We dedicated to them a new volume of the Immergas technical library - says Alfredo Amadei - which focuses on the hybrid systems and new indoor climate solutions that we have presented and that we are developing for the next few years».

The Immergas area, dominated by the 6m-high Caius Colossus, has become a reference point for many institutional meetings dedicated to a future of indoor climate focused on comfort, energy savings and sustainability. All this was extensively discussed by Senator Paolo Galimberti (Secretary of the Senate Commission for Industry), Federica Sabbati (Secretary General of EHI - European Heating Industry), Robert Nuji (DG Energy - European Commission) and Alberto Montanini, who, in addition to his role as Director of Immergas Standards and Associative Relationships, is also President of Assotermica and Vice President of Federcostruzioni.

«We have been walking the road of innovation for over 50 years - asserted Alfredo Amedei - and we began 2016 by expanding our Research Centre. There will be more laboratories, which will be technically updated and made more efficient in order to promptly present new appliances, new boilers and new systems to the heating market, and beyond. This drive towards product and process innovation extends to the production facilities in Slovakia (Immergas Europe in Poprad, where 80 people work) and in Quavzin in Iran (Immergas Pars, with a staff of 18, which started its first series of industrialized production of boilers in 2015).

The most important Italian fair dedicated to home climate control is scheduled from 13 to 16 March at Fiera Milano. New products, hybrid solutions, new services and many learning opportunities for the sector’s professionals. Immergas joins the Voluntary Protocol setup by Assotermica to monitor the market.